Spending the holidays aboard a luxury yacht charter can take the stress out of this time of year.  Your time onboard can instead be spent relaxing with family and friends as you tour the many sight that New York City has to offer.  With fine dining provided by an onboard chef, you will have the opportunity to create a holiday memory that will last forever.

Spend the Holidays Relaxing on the Water

Celebrating the festivities with family and friends on a luxury yacht charter can take the stress out of the holidays.

This time of year can be particularly stressful as families try to plan get togethers that everyone will enjoy.  From the cleaning and decorating to food preparation and attending to your guests, this can feel less like a party and more like work.  Celebrating the festivities with family and friends on a luxury yacht charter can take the stress out of the holidays.  Guests will enjoy all of the sights that the city has to offer, while spending time celebrating with friends and family.

Enjoy the Many Amenities that a Yacht Charter Has to Offer

A luxury yacht charter can feature festive decorations to set the mood for everyone.  There are plenty of ways that guests can celebrate the holidays onboard, from dancing and a DJ to live music.  There is also an endless choice of dining options, with an onboard chef, catering to the needs and tastes of your guests.  Whether you are looking for a sit-down captain’s dinner or more casual hors d’oeuvres and cocktails, you can choose the level of formality for your holiday get together.

A holiday spent with family onboard a luxury yacht charter will not only ensure that the time together is a success, but it will also allow you to relax while enjoying the company of your family.  This type of celebration is one that will be remembered for many years by everyone, old and young. 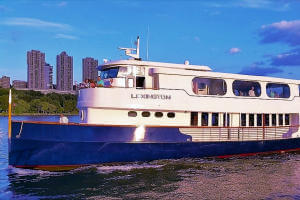 The heat of summer may be over, but the fall cruising season is in full swing.  The outdoor temperatures are more comfortable in the fall, allowing you to enjoy time on the decks of a luxury yacht charter.  The New York City skyline is a breathtaking view with clear fall skies, crisp temperatures and a moon that is sure to stun everyone onboard.

Cool Temperatures Allow Guests to Rest Comfortably on the Deck

Fall is a wonderful time for temperatures, with comfortable days and cooler nights.  Your guests can lounge on the deck of their own luxury yacht charter, enjoying the comfortable temperatures.

Fall is the optimal weather to truly enjoy the many sights that the New York City skyline has to offer.  Enjoy the wind in your hair during the day, while taking in the sights.  Stretch out on relaxing lounge chairs with a warm blanket in the evening to see New York City as never before.

Plan a Sunset Cruise or a Night Charter

Fall sunsets are like no other, particularly with the city’s breathtaking landscape in the background.  You can take in the many colors of the skyline over New York City.  Consider an evening and night charter to get the full effect of the season.  With the Harvest Moon lighting up the sky during the autumn equinox, a luxury yacht charter this fall is an opportunity not to be missed.

There is little that compares to the sights of New York City.  From the Statue of Liberty and Ellis Island to the Empire State Building and the Brooklyn Bridge, a tourist rarely has a lack of things to do.

From the Statue of Liberty and Ellis Island to the Empire State Building and the Brooklyn Bridge, a tourist rarely has a lack of things to do.

One of the challenges that go along with a busy city like New York, is getting from one area to another.  With congested streets and a subway system that can overwhelming for a tourist, this can add a unique challenge.  Aboard a luxury yacht charter, visitors can take in all of the sights that the city has to offer in comfort.

Many of Prestige Yacht Charter’s luxury yachts have a cruise route that takes guests onboard through the many must-see landmarks that the city has to offer.  These sights include the famous Manhattan and Brooklyn Bridges, Governor’s Island, the Statue of Liberty, Ellis Island, One World Trade Center and the Empire State Building.  With a route that is perfect for taking in all of these notable sights that go hand-in-hand with New York City, a luxury yacht charter is a great way to see the city in comfort and style.

Touring While Enjoying Your Time Onboard

Not only does a luxury yacht charter of New York City offer you a way to see the important landmarks for the city, it is also a great way to do so while relaxing in comfort onboard.  Each climate-controlled yacht charter offers a variety of amenities for guests to enjoy.  These range from comfortable outdoor sun decks to custom dining options and a full-service bar.

This unique way to tour New York City is something that you and your guests will never forget.  Prestige Yacht Charters has a variety of luxury yachts for cruising the city.

For a Spectacular 4th of July, Watch the Fireworks from the Water

There are few areas that are more spectacular for viewing fireworks than on the water onboard a private yacht charter.  Macy’s July 4th fireworks display in New York City is one of the largest and most famous to celebrate America’s independence.  The crowds can present a challenge in finding a comfortable location to view the spectacular display.

Onboard a private charter on the Hudson River the view of the fireworks is like no other, while you also have the opportunity to admire the Manhattan skyline illuminated.

Enjoy the Fireworks in Comfort and Style

A private yacht charter can make the 4th of July a truly memorable event for everyone onboard.  On the water your view of the fireworks is unobstructed as you take in the many sights that go along with this spectacular night.  But more than that, you can relax in style and comfort onboard a private yacht charter.

From comfortable deck-side seating to catering and beverage service, you and your guests can experience a 4th of July that you will remember forever.  The amenities for cruising the Hudson River on the 4th are endless.  You and your guests can enjoy hors d’oeurves and appetizers while onboard or a four-course meal, while you take in all of the sights that the 4th of July over the city has to offer.

Other Landmarks to Enjoy Onboard

The sights onboard a private yacht charter extend beyond the fireworks.  You will be able to take in the many landmarks that the city has to offer, all from your comfort onboard the charter.  This includes the Empire State Building, Brooklyn Bridge, Freedom Tower and the Statue of Liberty.

For a truly unforgettable Independence Day experience, plan to view the 4th of July fireworks from onboard a private yacht charter. 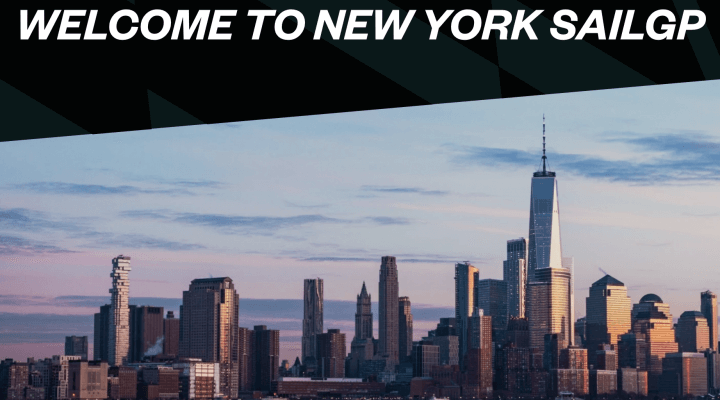 Watch the exciting SailGP race up close from a Prestige yacht! On June 21-22, six nations will compete on the Hudson River as part of a $1 million title tour. Australia, China, France, Great Britain, Japan and the United States are fielding teams to race identical F50 catamaran sailing boats.

Five races on Saturday, June 21 will winnow the field down to two finalists on Sunday to determine the New York City event winner.

…the young Americans are considered the rookies of the tour, but they have already participated in 13 world championships

A global sports championship founded just last year, SailGP held its first races in the United States in San Francisco on May 4-5. Australia bested Japan to win that event. A race near Cowes, Isle of Wight, in Great Britain will follow New York City on August 10-11, and the final contest will take place off of Marseille, France on September 20-22. The race on September 22 will determine the winner of the tour.

At an average age of 26 years old, the young Americans are considered the rookies of the tour, but they have already participated in 13 world championships, an America’s Cup and the Volvo Races. Currently, they are in fourth place in the SailGP tour.

Prestige offers the perfect way to view SailGP, up close and personal. Sip cocktails concocted by our new bartenders who specialize in molecular mixology. Or just enjoy the spectacular New York City skyline and the cool breeze out on the water as you wait for the races to begin.

For those who do not wish or are unavailable to watch SailGP, Prestige also offers memorable July 4th yachting opportunities as well. Honor America’s birthday on the East River as fireworks light up the Brooklyn Bridge with a patriotic panoply of colors!

Of course, Prestige offers the private yachting experience throughout the year as well with trips around Manhattan, up and down the Hudson River and on Long Island Sound. Recently, we have added new ships to our fleet serving Southeast Florida, and we are renovating Juliette in New York.